Letter From the Editors

Generally, love and lust have pretty clear connotations. Love is pure. Lust is sin. Love is a many splendored thing; lust leads to many indulgent mistakes. Your faithful Cipher editors have a few too many horror stories of our own to argue: Picture getting your tongue sucked on by a leechy kisser. Or having some guy you barely know start talking dirty while you’re making out. What about having a guy cum on his own face during your first hookup? Or being asked to have sex with someone while he wears his hockey skates? Yes, these things have happened to us (though we’d never kiss and tell). Then again, love has its downsides too; certainly the heartbreak that often comes after love is far worse than the mortifications of lust. The illustration that graces this page did not, after all, come out of thin air. Of course, in the best situations, love and lust go hand-in-hand. That’s where the Love/Lust Issue comes in. END_OF_DOCUMENT_TOKEN_TO_BE_REPLACED

“It’s beyond technology. It’s a culture. It’s a community.  No other company can drop a device and generate this much energy.”

-Rey Gutierrez, a San Francisco resident who waited in a line several blocks long outside the Apple store on April 3, in anticipation of the iPad’s release. END_OF_DOCUMENT_TOKEN_TO_BE_REPLACED

I Love You, Joanna Newsom

And I don’t care if the whole world knows it

by Will Vunderink, editor; illustration by Becca Levi, staff artist

Have you ever listened to her music? Her first album came out in 2004, so she hasn’t been around long. She had a sort of Renaissance Faire aura about her for a while—that’ll happen when your primary instrument is the harp—that she’s recently been shedding for a hipper, more stylish and approachable image. Gone are the velvet dresses and elfin hair—lo and behold, she’s hot. It’s like when your best friend’s geeky little sister comes back from being a counselor at summer camp one year during high school, and all of the sudden she’s way too attractive to be your best friend’s little sister. END_OF_DOCUMENT_TOKEN_TO_BE_REPLACED

It wasn’t until I began listening to Dan Savage’s weekly sex advice podcast titled “Savage Love” that I discovered the world of centaur fetishists. Yes, there are people out there who fantasize about having sex with centaurs, those mythical, half-man, half-horse creatures straight out of Greek mythology. The idea of banging a centaur had not entered my sexual fantasies before, and my immediate response was, “What the hell is wrong with these people?” After listening to numerous podcasts and reading Savage’s column, I can’t say I understand the plight of centaur fetishists in society today, but I have discovered a newfound respect for their own acceptance of their sexual desires. Savage’s open approach to almost everything in the realm of sexuality allows people to explore their sexual comfort zones and learn to communicate openly about sex. END_OF_DOCUMENT_TOKEN_TO_BE_REPLACED

Balls to the Wall

It’s easy to ridicule the name—it can conjure visions of the white marble testicles on Michelangelo’s David, or two scoops of vanilla ice cream—but for the fathers and daughters who attend them, “Purity Balls” are serious. They began as Evangelical Christian fare, but in little over a decade they have taken place in forty-eight states and garnered interest in at least seventeen countries. Their objective is to promote a close, protective relationship between father and daughter. They center on a solemn commitment ceremony in which a father reads and signs a pledge to actively guard his daughter’s virginity, and his daughter makes a silent promise to herself and to God to stay chaste until marriage. And they began in Colorado Springs. END_OF_DOCUMENT_TOKEN_TO_BE_REPLACED 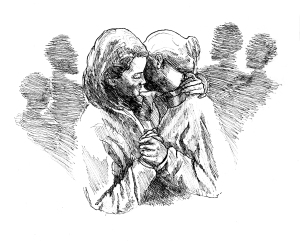 Disclaimer: This article is a rendering of my own personal experience, and is not intended to speak for an entire community. Rather, it represents the experience of a small piece of that whole.

It’s Friday night, and campus is abuzz with the whisper of evening plans unfolding. Three hours until Midnight Breakfast and you’re in a friend’s room, probably pre-gaming, definitely listening to music.  The night progresses, and above the bumping bass-line you hear one of your friends exclaim to the group, “Let’s go out!” You and your girlfriend agree, because your sexuality shouldn’t hinder hanging out with your friends, right? A short walk in the biting cold (its temper beaten into submission by the three or four “Rastails” and other beverages you’ve enlisted to act in your defense) leads you to the dimly lit, sweaty, pulsating sex pit commonly known as a house party. You barely have time to survey this sea of bodies before you’re swept into its clutches. PDA is clearly the norm, but you’re hesitant to make a scene. You and your girlfriend spend a good twenty minutes dancing with your friends, trying to blend into the heteronormative scene as best you can, which isn’t hard because neither of you would necessarily tip off anyone’s “gaydar.” As you watch your peers succumb to the sexually charged atmosphere and the contents of their red Solo cups, inhibitions begin to fade. Everyone around you is dancing and having a good time, and you decide there really is no reason to abstain from dancing with your girlfriend. I mean, this is a liberal school, right? END_OF_DOCUMENT_TOKEN_TO_BE_REPLACED

What if you’re not into men or women?

Although it may seem like an unconventional topic for a college campus filled with post-pubescent hormones, asexuality shouldn’t be taken lightly. For most young adults, “sex sells” and this phrase certainly seems to apply to a majority of consumers.  But what about the minority for whom sex is not enough? END_OF_DOCUMENT_TOKEN_TO_BE_REPLACED

A Queer Time of Year 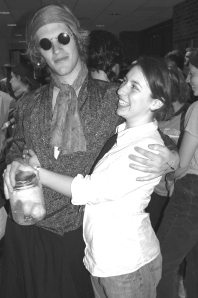 It’s Gaypril. Across the country, various colleges claim this month as a time for celebration and education regarding lesbian, gay, bisexual, transgender, and queer (LGBTQ) issues. At CC, it is a time for the queer and allied community on campus to expand horizons, raise awareness, and party it up at Drag Ball. END_OF_DOCUMENT_TOKEN_TO_BE_REPLACED

The Art of Sexy

When you read beauty magazines or even discuss modern standards of feminine beauty with friends, ancient Greek statues don’t often pop up in the conversation. But what if those very statues started it all?  What if their marble curves gave birth to the physique that we now find sexually appealing? At Colorado College, we hold ourselves to a high standard of physical fitness; notions of beauty here often promote a basic ideal of athleticism and lean fitness. This is largely because CC is a physically active community, but what if there’s more to it than that? What if we’re programmed to see sexual attractiveness partially through the eyes of the Greeks? END_OF_DOCUMENT_TOKEN_TO_BE_REPLACED

Cipher
Create a free website or blog at WordPress.com.